A Call for Cohesive Disruption 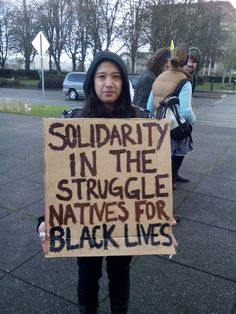 Today’s racial news in America highlights our divisive past, and the concerted effort by some to hide that past, and pretend this country has a pure history of fighting for and forwarding the cause of “liberty and justice for all.” I’ve watched a controversy brew between #BlackLivesMatter and #NativeLivesMatter, and I can’t help but to shake my head in disappointment, because ours is one struggle, which includes two tones of brown skin.

Black American and Native American oppression are twin atrocities, born of the same mother, evolved of the same narrative, promoted and prolonged by the same perpetrators, and champion of the same motives. Our story of horror begins on October 13, 1492. Christopher Columbus had just landed on what is believed to be Watling Island in the Bahamas. He thought he had found sea passage to Asia, and he claimed this land for Spain. A short while later, he spotted Cuba, mistaking it for mainland China, and In December of that same year, he landed on Hispaniola, and thinking it Japan, claimed it as a Spanish holding.

Having promised riches to the Spanish crown, Columbus marauded, murdered, and enslaved the native population, returning to Spain with as many Native Americans as he could stuff into his ships. On the sea voyage, Indian remains were cast into the sea without regard, and Columbus returned to a hero’s welcome with exotic savages, who could be sold as slaves in Europe. In short, Christopher Columbus founded the trans-Atlantic slave trade, an accomplishment of infamous repute.

The trans-Atlantic slave trade is the source of why 12.5 million African human beings were kidnapped from their homes and families and shipped to the new world as slaves for white Americans. Columbus’ enslavement and campaign of terror decimated the population of Hispaniola, and later, when Native Americans were found to be inadequate as slaves, due to their lack of immunity to European diseases, white colonists began a program of displacement and extermination. This meant that another group would have to serve as slaves. Another group of brown skinned “savages,” who had better immunity to European diseases was found, and the trans-Atlantic slave trade switched directions.

America was born and bred on the notion that neither black nor native lives matter. It was written into our laws, and accepted as “fact” that neither group counted as human. Either could be killed at the whim of white people, and neither had personal or collective rights to exist, live with family, or enjoy freedom. From the very beginning of this democratic experiment, white supremacy has been the law of the land, it is part of America’s genetic encoding.

As some Americans awoke to the immoral atrocity being perpetrated in their own country, some Northern states began to refuse enforcement of the fugitive slave act. Southern states were outraged and soon a rift divided this nation as the south fought to maintain the institution of slavery, and the rights of individual slave owners over the rights of Northern states who didn’t want any form of slavery to exist within their boundaries. This led to the bloodiest war in US history, and resulted in the abolition of American slavery. However, it did not allow African Americans to awake from the nightmare of white supremacy.

In parallel, native people, having no economic worth, were designated as savages and hunted. They enjoyed the right to live in peace, provided the land they lived on had no economic value to the the “superior” white “civilization.” They were stalked, and slaughtered for daring to think their land should be protected from white aspirations to harvest their forests or destroy their sacred lands in search of gold. They were forced onto reservations, enduring death marches which saw natives slaughtered, tortured and terrorized into submission.

A generation later, as Jim Crow visited racial terrorism against black Americans, native America’s children were kidnapped and forced to live in boarding schools. There, they endured cultural genocide, physical and psychological abuse, giving rise to a lost generation of Native children who had no home in America or back on the reservation.

Today, our two peoples continue to live with the consequences of white supremacy in ways that no other group can fathom. We are the most impoverished people in America. Our two peoples are killed by law enforcement and imprisoned at significantly higher rates than any other group. We have both paid the highest blood price to create and support white affluence in America.

I say it is time for us to stand together and disrupt this system of oppression. It is time for us to work together to dismantle systemic racism and overcome the shared atrocity that is our past. We are twin victims, born of the same perverse malignancy that dons white hoods in the dark of night, to hide in cowardice as it rallies beneath a banner of hate to inflict violence on the hearts, minds and bodies of brown people. Our oppressors would have us be silent, but I say we join our voices together and let loose a thunderous demand for justice and equity. For my Black brothers and sisters, your ongoing demand for freedom is itself an act of defiance. Defiance to those who would subjugate you and take what you produce. To my Native brothers and sisters, your survival is itself an act defiance. It is a warriors scream that says “We won’t be hunted to extinction!”

As racial groups, our histories, our subjugation, and our terror have been intertwined. Today, let’s link arms and stand together, holding each other up against the gale of injustice. We should hold our heads tall and let our refusal to be silenced echo through the halls of white supremacy. We are strong and proud, we are twins and our justice is inextricable. Let us be allies and warriors together. Let us create the world that was denied our ancestors. Let us take our rightful place at the table as human beings, who will not be shoved into chains or extinction. Let us work together and overcome injustice. 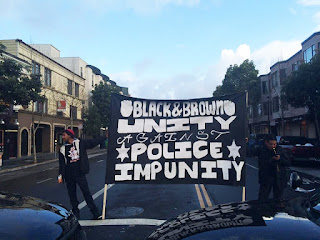 Posted by @NativeMikeAdams at 4:56 PM

Thanks for your comments! :-)
My wife says comments save fairies. I mostly just want to know that the traffic hits I get on my statistics aren't Russian Spam-Bots!

My Sources of Information